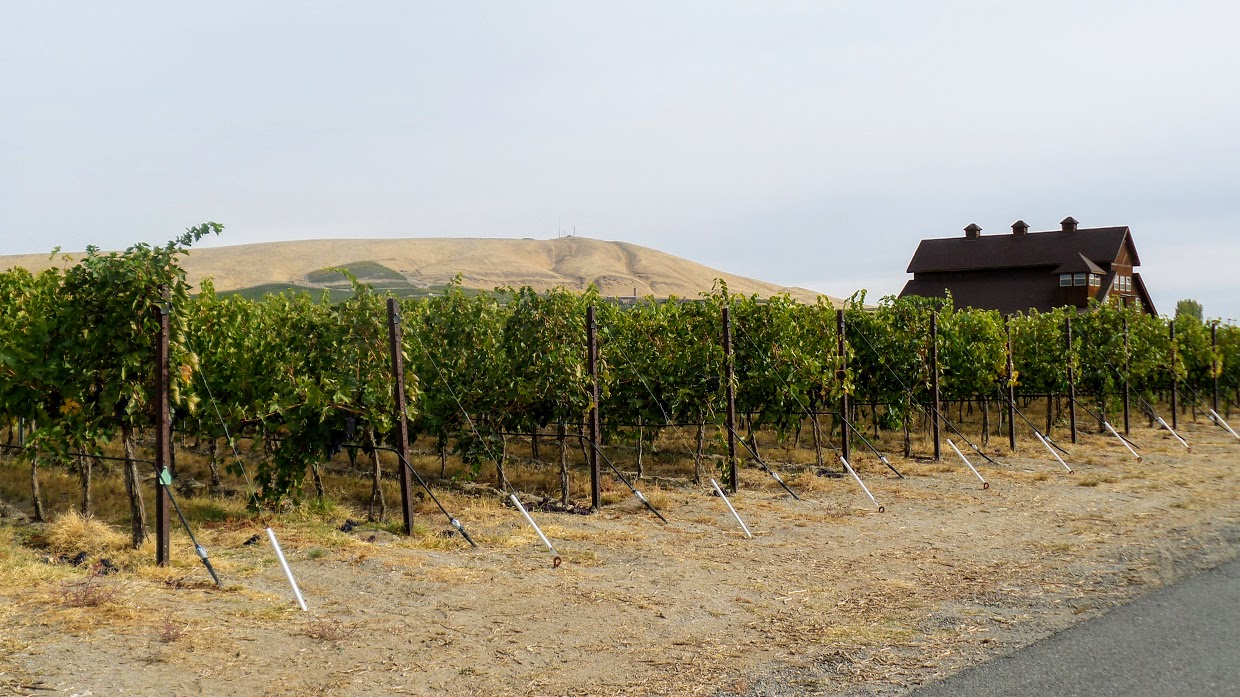 In this, the second part of my Red Mountain adventure, I will describe this area and the legendary figures we were privileged to meet.

When our bus full of wine bloggers pulled into Ciel du Cheval Vineyard we entered the hubbub of the 2018harvest. Forklifts, tractors, people, and trucks 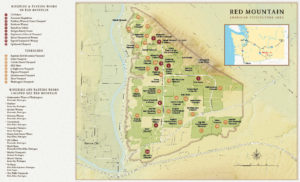 were scurrying around hauling containers of grapes that had been harvested only minutes or hours before. The minute the bus doors opened all of the wine bloggers, myself included, joined the scurrying around by taking pictures like we had never seen a grape before. Wine bloggers get excited. transport that was to carry us around on our tour of the vineyards in the Red Mountain AVA, a horse team and wagon from Red Mountain Trails, and our guide Dick Boushey.

Dick Boushey is a farmer and I can’t give much higher praise than that. Dick used to grow cherries and apples and as the region changed, he changed along with it planting his own vineyard in 1980. Dick doesn’t just grow grapes, he excels at it, and this isn’t just my As we rode through the vineyard, Dick regaled us with stories about everything from the grapes and how they are managed, to the vineyards blocks he either has or does manage, his opinions on organic farming, mechanical harvesters, and his pickers. Some of these items I will leave for Dick to share with you as they aren’t my stories to tell. Dick told us there are two limiting factors to the number of plantable acres in the Red Mountain AVA, water and the steep slopes.

Irrigation: Mostly drip via deep wells and the Yakima River

As Dick explained, there is a limited amount of water, both natural and available irrigation water. Unless more water is allocated to this area much of the remaining land will remain un-planted. The advantage of the limited rain fall is less stress by both pests and mold, and it allows the grower to control the precise amount of water provided to the vines allowing a consistent fruit year after year. More water for the Red Mountain AVA could be a blessing and a curse. AVA. Due to the angle of the slope he had to pay his workers extra money because of how difficult it was to work on, as well as how dangerous it was. Much of the remaining unplanted slope is too steep for modern viticulture methods so unless the viticulturists want to start farming with mules like they do in the old world, these areas may remain vine free.

One of Dick’s stories I will share is that Dick’s pickers are all women except for one token man (Dick’s words) and he provides work for them year round. Many of them were apple pickers who didn’t like the heights.  During harvest they can earn between $40-$50 dollars an hour depending on bonuses.

Another of Dick’s interesting opinions is his belief that mechanical picking is as good as hand picking and even superior in some aspects due to the abilities of the optical sensors, destemming, and ability to quickly deliver cool fruit.

Listening to Dick Boushey speak on grapes is like listening to a living encyclopedia, but a lot more entertaining.

The first grapes to be planted in what was to become the Red Mountain AVA were planted by John Williams and Jim Holmes. We wine bloggers were lucky enough to have Richard Holmes, Jim’s son, talk to us about the region, soil, grapes, trellising, and child labor. To be fair, the child labor was his when he was planting grapes for his father and listening to Rock and Roll music in the vineyard in 1976.

Richard has a unique ability of storytelling and relaying facts about the history of the Red Mountain AVA. As he spoke about the Missoula Floods, the volcanic activity, and the tectonic plates crashing into each other creating the soils, I could feel the primordial matter in my body responding to his words. Honestly if he wasn’t so damn good at producing wine, he would make a world class teacher.

Due to the soils and the lack of water, phylloxera is not an issue in the Red Mountain AVA so most vines are left on their own rootstock as they do not require grafted roots to resist this pest. One of the major advantages of the vines being own-rooted is their ability to recover from cold snaps that would otherwise require regrafting.

Sunlight: 2 hours more per day during the growing season than Napa Valley

The Red Mountain AVA is located roughly 520 miles north of Napa and Sonoma which provides the 2+ extra hours of daylight. The extra sunlight is something that needs to be controlled with canopy management. Both Dick and Richard pointed out the different trellis styles and canopy management used in the different vineyards. Richard shared how providing the proper shade to the grapes can keep their temperature up to 20 degrees cooler allowing controlled ripening and acid preservation. The Red Mountain AVA is a special place with a unique environment allowing for amazing grape development. And as we all know, great wines is grown, not made. 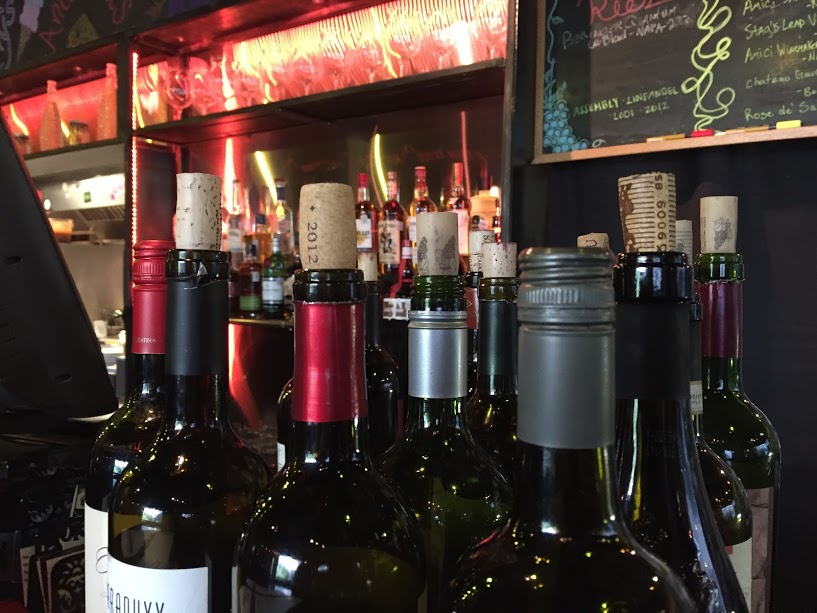 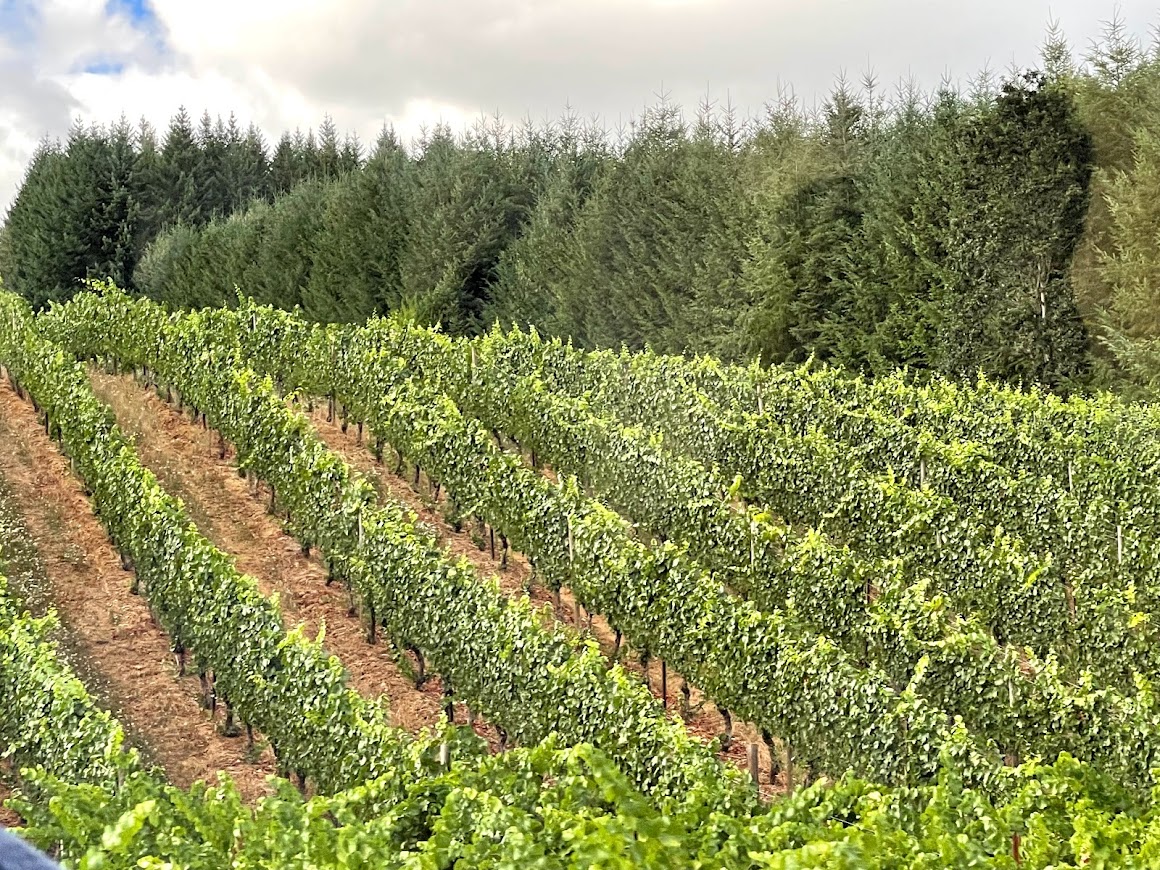 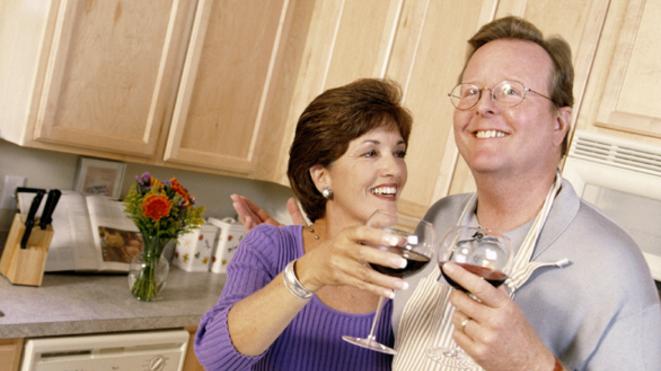